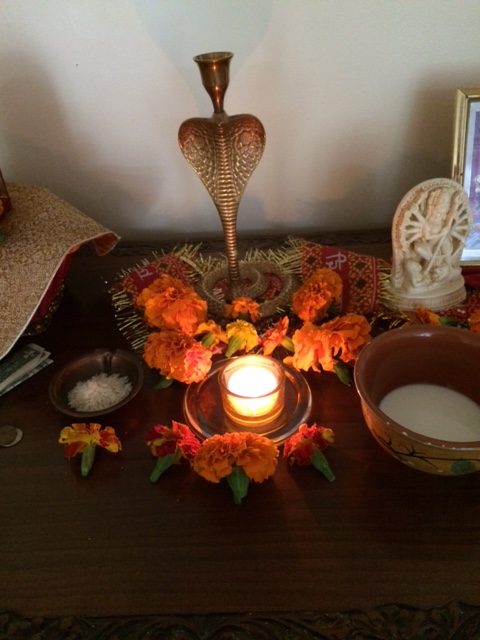 By Priya Kenney and Swami Nirmalananda

Nag Panchami is the Hindu festival honoring the energy that has become this universe.  “Nag” (nawg) means snake and “panchami” (pawn-chaw-mee) is the name of the fifth day after the full moon, July 23rd this year

In the human being, this kinetic energy is dormant until awakened, lying coiled in the energy center just below the tip of your tailbone.  Once awakened, Kundalini arises within you and blossoms you into the Divinity you have always been.  This annual holy day honors Kundalini as the serpentine energy, both within the human being as well as in snakes.

Even though people in India are not widely familiar with Kundalini and Her association with the snake, Hindus regard it as an auspicious day.  The mystical energy within the human being is secret knowledge, so most people are worshipping the snakes, as Hinduism sees everything as being holy.  They bring flowers, sweets and do ritual baths with milk and water.

Especially Shiva temples have snake murtis  because snakes are dear to Shiva.  He is usually shown with a cobra coiled around his neck, indicating that He is the origin and master of Kundalini.  He becomes the Guru in order to make this energy available to spiritually motivated people, who are naturally drawn to yoga’s mystical practices and initiations.  Thus, on Nag Panchami, we honor “nag,” the snake, as well as the Guru who has given us the great gift of Shaktipat.  You are honoring Shiva, who is arising within you.  This is the promise that you will know your own Shivaness.

When events beyond our control cause unavoidable changes, locations and fees are subject to change without notice.

Arising within, through the Gift of Grace, the spiralling energy of Cosmic Consciousness uplifts you into your own Divinity.