The Guru as Grace

by Lori Kenney, based on an interview with Gurudevi Nirmalananda

Early in Shree Guru Gita, we are entreated to find our Guru:

Gu- means darkness, and ru- means light.  The Guru is the current of consciousness that takes us from darkness to light and provides a bridge over the ocean of samsara to the splendor of liberation. The Guru is our doorway to grace. 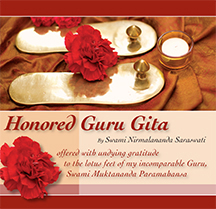 Gurudevi's Guru Gita CD includes "Om Guru, Mere Guru" as an opening chant, which she wrote after taking sannyasa initiation. It is a heartfelt expression of gratitude to her Guru, Baba Muktananda.  After she wrote the chant, she realized that it gives each person the opportunity to sing to their own Guru while she sings to her own, for "mere" means "my."

Baba Muktananda originally made it available through SYDA Foundation, which was founded to represent him in America.  Gurudevi's CD is one of many released by different organizations since then.  Gurudevi welcomes yogis and supports them in their relationship with their chosen Guru, whether through SYDA or any of the many Ashrams and teachers that have sprung forth as part of Baba's big family. 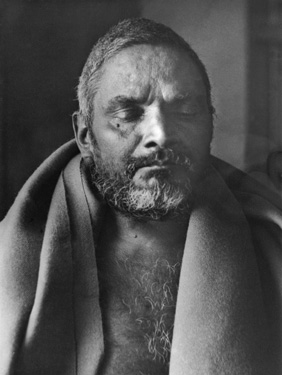 A wonderful online resource shows the extent of the family spawned by Nityananda’s teachings: www.nityanandatradition.org. This site shows all the direct disciples of Nityananda, one of whom is Muktananda, and all his disciples.

Gurudevi Nirmalananda is one of over 200 teachers carrying on the work Nityananda began in the mid-20th Century – to make previously hidden teachings available throughout the world. The reach of Nityananda’s teachings through all his disciples and their disciples is immense.

The generosity of Gurudevi’s spirit is beautiful. “It is such a rich experience to be able to give people that freedom to chant to their Guru while we’re all chanting Shree Guru Gita together. It makes the room feel as if the walls are dripping with love.”