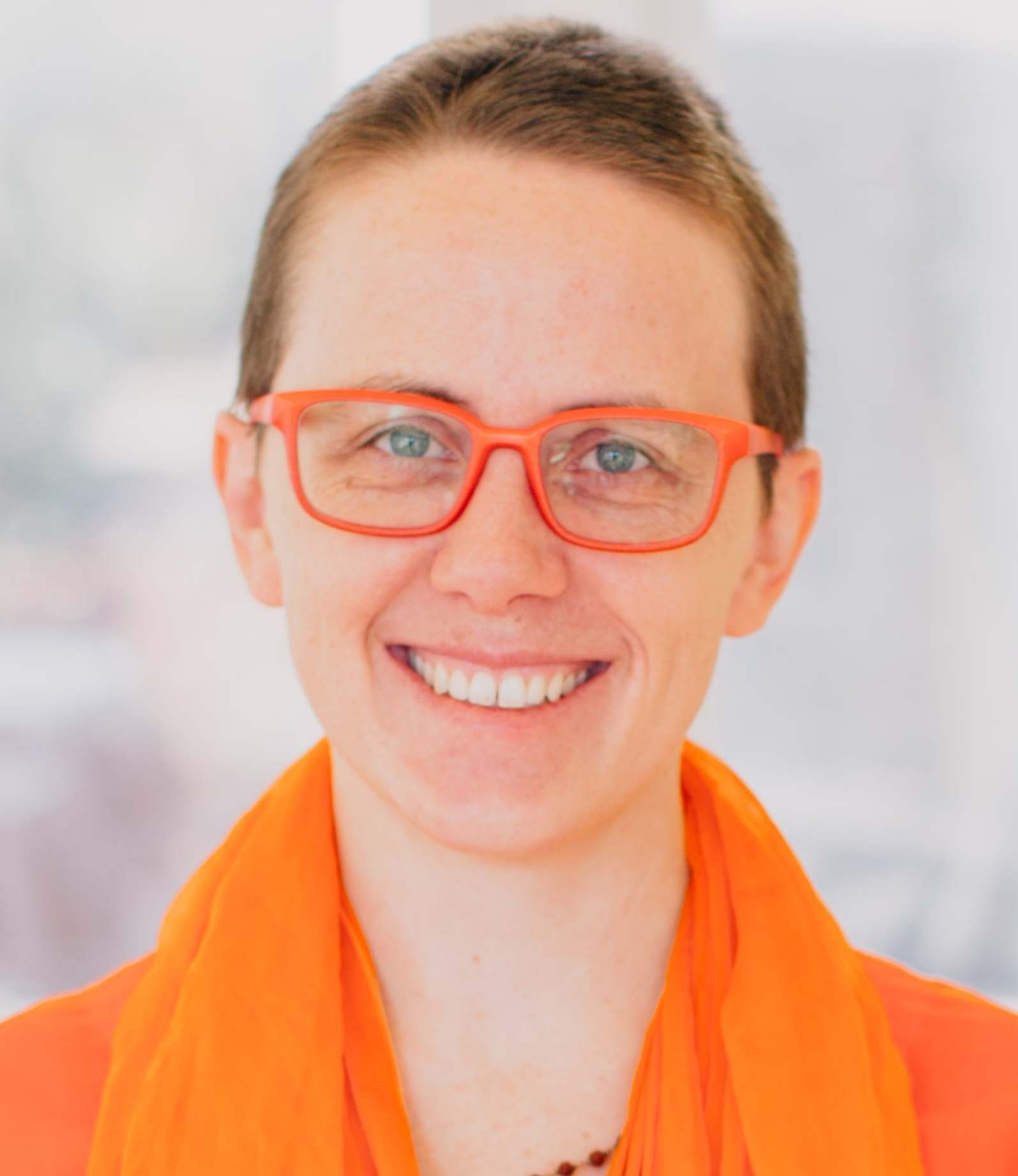 Satrupananda Saraswati began practicing yoga and meditation in Calgary Alberta, Canada in the 1990s.  As an undergraduate student, she spent some time in China and Southeast Asia where she deepened her interest in Eastern spirituality.  This pursuit led Satrupananda to Svaroopa® yoga and to her Sadguru: Gurudevi Nirmalananda, ultimately to becoming a swami, a yoga monk.

Swami Satrupananda is both a Svaroopa® yoga teacher and Svaroopa® Vidya meditation teacher.  Currently serving the Ashram primarily in management, she draws on her many years of professional experience, due to having earned a Ph.D. in electrical engineering and serving in both industry and education.

"I didn’t know what to expect when our Business Management Consultant decided to receive initiation as a swami.  Without having any idea of who was going to come back from India, I found she is much the same person.  Yet, since she has returned, there is a softness and happier way to her.  It is a more centered expression in general.  Her hair is also much shorter!"  — Tom Trautlein, SVA Communications Traffic Manager

"Before becoming a swami, Satrupananda and I worked together on financial tasks regularly.  I wondered what would change after she became a swami.  She is calm, easy and clear!  On a recent long call, our financial tasks were typical.  Without effort, my orientation shifted towards her state. At the call’s conclusion, I was calmer, clearer and more at ease inside and outside."  — Peter Gallagher, SVA Board Treasurer

In early adulthood, Satrupananda undertook the mainstream course of obtaining an education, a job and a house.  Succeeding in all these, she did not find the fulfillment for which she yearned.  Her commitment to her yoga practices and to her spiritual guide, Gurudevi Nirmalananda, fulfills her yearning.  In being a swami herself now, Satrupananda’s one focus is on Self-Realization.  “Taking vows in the sannyas ceremony to become a yogic monk,” she says, “has given me ‘freedom from and freedom to.’”  She has been freed from most fears and reactivity.  This freedom supports her capacity for effectiveness as Business Management Consultant.  It also frees her to care more, to love and to give more freely.

Her primary service to the Ashram will continue to in management.  She supports staff and sevites as well as the organizational structure to “continually improve upon being a conduit of Grace.”  Swami Satrupananda also looks forward to teaching more meditation courses.

"I’ve always enjoyed Satrupananda’s joyful harmonium playing for satsang chants.  Now that she is a swami, she offers this gift to us Ashram residents weekly.  She also gives talks on the teachings.  I so appreciate the way she interweaves her science background with the mystical Svaroopa® Vidya path to Self-Realization.  She uses her understanding of scientific principles to illustrate the subtle principles of Consciousness.  The result is a sublime experience for us.  — Marlene (Matrikaa) Gast, CSYT, Certified Svaroopa® Vidya Meditation Teacher

Swami Satrupananda wants to serve everyone with whom she comes into contact.  Thus, each might know their own Self.  “It’s an honor to have that responsibility,” she says.  “It’s one that I hold highly and respect.  It begins and ends with extreme gratitude to Gurudevi Nirmalananda for this path.”